This is basically an interview with a Party/Wedding Caricature Artist.

The ultimate guide to just about everything you wanted to know about hiring a caricature artist for a party or wedding. 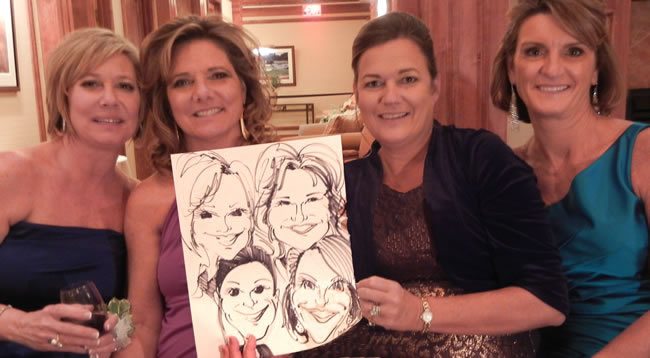 (This caricature faq list is in no particular order, mostly fun at the top, more relevant towards number 1, enjoy!)

21. Can I have more hair? No wrinkles and no double chin! Do I have anything in my teeth?

Sshhuurree. No problem. People, especially at a party don't want something insulting, they want to be flattered and not afraid to show anyone. I don't do the type of caricatures that play up on the huge teeth and noses.

20. Should I keep my glasses on? Which way should I look? Should I smile

Hey, that's three more questions right there... If you always wear them, leave them on. Just look in my direction and yes you can smile, I'll let you know when I need it so your cheeks don't hurt.

No, I'm self taught, when I was in high school we took a family trip to Disney and I watched an artist in the Contemporary Hotel doing them. When I got home I practiced from record covers and magazines, then made up some samples, got a spot at a flea market, then at Advertureland Amusement Park on Rt. 110 (around 1978/79), now I just get booked at parties.

18. Do you do private parties, kids parties, adult parties?

Of course, this is kind of a funny question, the answer is always yes. I could be drawing at an office party and someone will ask if I draw at birthday parties or vice-versa. Usually I'll be drawing at a first birthday, when I'm done with the kids and the adults start coming over, someone will ask if I do adult parties. During just about every communion, bar mitzvah, first birthday and baptism, the adults can't wait to get done and usually act like bigger kids than the kids do.

This is usually the next question, the answer to this is generally yes, throughout Long Island, I've been cutting back a little lately, not going into NYC or beyond as much as I used to.

16. Do you do Block Parties? What about Rain Dates?

I haven't done a block party in years. There are a few reasons for this; At block parties families all chip-in and invite their friends, there are lots of kids/adults, they feel they might not get one of their kids done during that time. Rain dates are the other big problem, I really can't have one deposit hold two dates. I would need a deposit (non-refundable) for each date, people don't like that concept. Also there is the giving out numbers or making a list of names problems, see Question 6 for more on that.

I usually eat before or after a party, I don't expect to eat at the party. Usually at longer parties when no one is coming over to me because they're all eating, I'll grab something quick at the buffet or the host will tell me make sure you get something. The funny thing is that sometimes when I'm booked for a five hour wedding or bar mitzvah (I get a dinner along with the photographers, dj's, etc.) I'll usually be drawing and get a tap on my shoulder by a waitress or waiter asking what I'd like for dinner. They'll give me the options and I'll pick something, I'll also ask them to let me know when it's ready. About half the time they never come back to tell me when it's out or where it is, so I never stop to eat.

14. Do you do caricatures full time, is it a hobby?

No, it's more than a hobby, caricatures are pretty much a weekend thing for me, my fun weekend job that I've been doing since 1978. I've always worked full-time during the week as a graphic designer, but switched to being a school bus driver over the past few years, so I look foward to the weekends, having fun with people.

13. Is it the same price for color or black and white caricatures?

Yes, it's just that I get more pictures done in b&w per hour, it depends on the amount of guests you're having. Also even if I'm doing b&w during the party I do take the colors with me and can do certain people in color if you want, like the bride and groom, etc.

12. Can you make me look younger and thinner?

This question speaks for itself, generally you can fool around exaggerating more with guys faces, but with women you draw them the way they look and give them nice bodies. Actually most of my exaggeration is drawing womens bodies and they love it. During the Bridal shower pictured below, I've had women come over saying "I heard you have a slimming pen".

11. Do you give lessons, are you an art teacher?

No, I work full-time as an artist and do these party caricatures on weekends, sometimes from photos on weeknights, maybe when I'm not working full-time anymore, but I just don't have the time right now. But if that changes I'll let you know. Actually I've done a few kids parties where there weren't many kids, so after drawing caricatures of them, I've given them some cartooning tips and tricks to fill in the rest of the time.

10. Do you pick out one feature to caricature or exaggerate on?

Not really, I see peoples overall head shapes, especially if there are two sitting together and then start drawing from the middle of the face out. The quick up and down glances are like putting pieces of a puzzle together. Catching the eyes are important to me, some caricature artists tend to exaggerate on the noses and teeth. I feel people don't want to be insulted at a party and draw them in a more complimentary style.

9. How long have you been drawing caricatures for?

That could have two answers, the real one, almost 40 years, since 1978 and the joking around one where I look at my watch to see what time it is compared to when the party started. The answer could then be anywhere from ten minutes to a few hours.

That's usually a trick question, it always comes at least once at the end of the night when the party will be over by the time I'm finished with the couple that's still sitting being drawn, your coming out of your zone, like when you've run a long race and nearing the finish line but it keeps moving 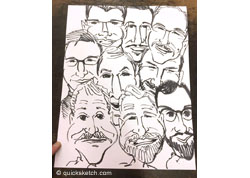 further away. The tricky part is that one person will ask it, but they really mean for a couple or their family, usually two or more people on one page = one drawing? (Wishful thinking, but it does happen sometimes)...

"Ok, one more caricature, then I've got to get going."
"Hey, how did that happen?"

For people watching it must look like it, my wrist and hand are constantly moving, but suprisingly no. Over the course of a few hours my back gets tired and I'll start standing between people leaving the "hot seat" and a new person getting into the hot seat. It's funny on days when I have two or three parties at the end of the night I'll get in my car to drive home and wonder why is the rear view mirror set so high?

6. Do you make a list or give out numbers?

Sometimes, I and most artists I know have found through experience that making a list or giving out numbers only works if someone is monitoring it, the system deteriorates quickly otherwise. I find they slow things up, I'll be finishing up with someone and asking for the next person to be ready and they are nowhere to be found, so after waiting for someone to find him or her, I'll take the next person after him or her and the kids around decide who's next... One thing that does work though is if there are multiple artists at a party, giving each kid a ticket for a caricature helps so that they give us their ticket, it helps so that they don't get pictures from each artist.

4. How soon before the party starts will you get there?

Within a half hour, to find the Maitre'd and see where they want me to setup. I don't have much equipment to bring in and setup.

People calling me with Wedding Caricature Questions usually ask these:

3. I'm thinking these would be great favors, can you do everyone?

Not usually, unless it's a wedding with a small amount of guests, typically the number of wedding reception guests number over one hundred. I do have other artists I call in sometimes but caricatures are more of an added attraction, as opposed to the favor that everyone gets, unlike a kids party, not everyone wants one.

2. Will there be long lines of people waitng?

Again, not usually, there are usually about two or four couples that will be waiting at any time. Having some people waiting and watching over my shoulder adds to the fun, they usually make comments to the person or people sitting for the picture who have no idea of what's happening.

1. Do you have insurance?

Yes, more and more catering halls are asking for insurance forms from any outside vendors that the people are using. BTW, I'm licensed & insured.

How much do you charge, by the person or the hour & how many caricatures can you draw per hour?

I charge by the hour, and can draw 10 people per hour in color or 15/16 people per hour in black & white (same per hour price for color or b&w). There may be a travel expense charge depending upon where the party is. I have a few different packages as far as pricing goes, (generally 2 hours, 3-4 hours, or 5 hours) but you'll have to call about that. ;o) 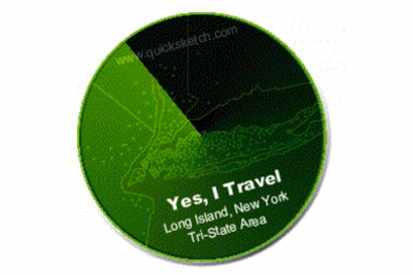 Feel free to download and print out my caricature artist promo above.
(My caricatures are hand drawn, so you get the original art, as opposed to a computer printout)